A Miami Vice suit is certainly a good way to get some attention.  I’m not sure I’d want to wear one out today, but for a costume party it can be a winner. 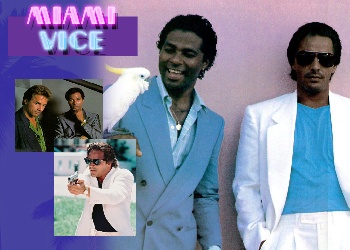 The TV show was on smack dab in the middle of the 1980s and was a big hit.  As a result, it was a big driver for men’s fashion in the decade, especially with suits.  The shows designers would be on the cutting edge of fashion, including Versace and Hugo Boss.  The key here is pastels all the way.  Here’s how the show’s costumes often went down and how you can get set up:

Jacket – Most people remember the classic white jacket that Don Johnson used to rock.  There were a few episodes where there were some shiny blazers but that wasn’t until a little later in the show.  Surprisingly, many European designers were the source here, including Armani .  Versace and Hugo Boss were also big.

Pants – Again, white linen all the way.  I noticed Johnson also had some nice peach or apricot pants too, so those colors can work.

T-shirt- You need to have a nice dark t-shirt.  Black is the best, but a purple or dark grey can work.

Sunglasses – Black  Ray-Ban Wayfarers were used on the show, but any black sunglasses will do for the most part.

Shoes – These are the tricky part.  The show featured sockless slip-on loafers, usually white to match the pants.  I can’t imagine what the smell would be like after a while in hot Miami.

The 2006 movie had the same edginess, but was much darker.  Director Michael Mann got away from a lot of the pastels and bright lights.  There were still designer labels everywhere, including Kiton.  Supposedly they supplied a lot of the suits for Colin Farrell, who played Crockett.