Revival of The Fedora Hat

The fedora hat got its name from a stage play more than a century ago in 1882, the main character of the play was named Princess Fedora Romazova and she wore a hat much like the one we know of today.

If you ask people today "what is a fedora hat?", they may all come up with different answers, but the original style of the hat comes from the Austrian Tyrol. The hat itself is soft brimmed having a crease lengthwise across the top of the tapered crown.

The Fedora is extremely fashionable today and they are easy to personalize due to their snap-brim. The brim goes all the way around and is very flexible, normally worn down at the front and worn up at the back.

Those who want to be a little different or more adventurous may decide to change the pinch in the crown to whichever degree suits them best, because the brim is so soft this also can be shaped to the way they wish to wear the hat. 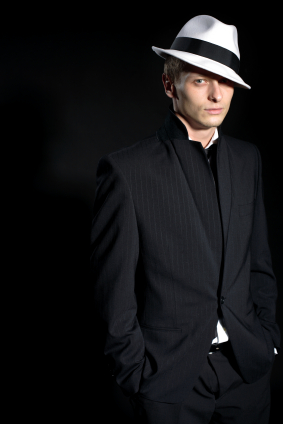 There are certain places in the world where wearing a fedora is like second nature to men, many who enjoy the blues music scene in cities like Chicago, Memphis or Detroit love wearing these dress hats.

Today mens headwear is certainly fashionable and when you think of how these hats have survived over a century and can still be a symbol of the well-dressed man, it's truly amazing.

These are being worn by people of different ages and all walks of life like politicians, actors, tradesmen, lawyers, doctors, hip-hop and rap singers, blues and jazz musicians to current pop artists. They have often been called gangster hats by many probably because of watching films featuring the likes of Al Capone and Bugsy Malone and may always be associated with these types of films.

This stylish hat is worn by men in business suits as well as by some who prefer to wear it with jeans and a smart leather jacket for that rugged look. The latter of the two resembling the Indiana Jones look, straight out of the 1981 hit movie “Raiders of the Lost Ark” very rugged indeed.

It is most definitely a great accessory for men linking the fashion sense of the past to the fashion stylings of today.

Which Suit Fabric Suits You? How Is The Panama Hat Different Than The Fedora Hat? Check Out A Funky Zoot Suit For Laughs! Learn To Dress For Your Body Type Top Notch Men's Fashion Tips Leave Fedora Hat Page For Mens Suits Home