The Black Suit - A Must Have

The black suit is an absolute must-have, but it hasn't always been that way. How did black suits ever become a staple for well-dressed men and even the subject of controversy?

For nearly 60 years of these suits were not at all a staple of men's fashion. Why? Well, from roughly the 1920s to the 1980s the thought to buy one had become somewhat of an unconventional notion for various reasons concocted by clothing retailers to demonize it as a top choice and steer suit-buyers to the more easily attainable and readily available blues and charcoals. During this era black became an increasingly unseen selection for daywear.

When the black dress suit was seen, it was normally seen on people whose jobs demanded it for purposes of formality, mourning or intended social distinction from their clientele. Furthermore, black suits were usually not of the finest quality, reinforcing the notion that a black dress suit was an unseemly choice for a regal man of style.

Fortunately the tide turned in the late 1900s, designers like Armani, Versace, Donna Karan and others began to use black as the fresher, Hipper color for younger men, for nights out on the town. As a result, it came to pass that entertainers, professional athletes and other celebrities began to don le style noir. For many reasons, it was a sound choice in these circles, whether it was the Hollywood set, or merely talented persons who wanted to escape any class or educational associations from their past. 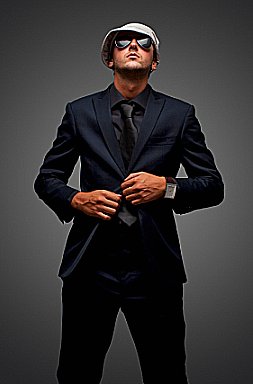 The black suit has power, mystery, sex appeal, it slims, it is undeniably formal and appropriate also. It is the color of the night, of the city, of things modern, and the new age. Also, at some point, there was a concurrence amongst the egalitarian smart set, rather than try to compete with those to the manner born, they would create their own “Oxford and Yale”. It amounted to nothing less than a new clothing dialect that announced their membership to their own clubs and universities. Even if you were from a Paul Stuart background, one gladly donned this protective camouflage in order to mingle with the interesting people without letting your Stuffy background or day job exclude you from the fun.

Furthermore, it became a way to sniff out those boring, stuffy guys in brass-buttoned blazers and khakis.

The black men's dress suit is hip, its updated and modern.Also, black is an instant power look, uniquely regal and sleek. It's always a good pick for guys in businesses where there is a need to command respect and attention. Black fills that order nicely.

If black was against a rule at some point for daywear, that rule is now dead. Although, according to one rather knowledgeable fashion historian, even in the past, you would occasionally see a very proper Englishman in a flawlessly cut black flannel suit out on the town.

If there happens to be any controversy about black dress suits for men anymore, the controversy seems to cut across generational lines to an extent. It seems that many, older, well-dressed men consider the solid black outfit to be a last resort in clothing selection.

Who Looks Best In A Black Suit?

Generally, people with dark colored or black hair and medium skin complexions are the ones who tend look best in a black suit. At the other end of the dressing spectrum, the younger minded dressers are promoting black as something their fathers do not like. To the up and coming generations, these suits stands for counterculture, independence and the night scene... This is a generation attempting to live an eternal life of stylish partying and black is slimming, mysterious, sexy, and defensive, all the characteristics that generation X’ers and Y'ers have decided define themselves by.

But how, you may ask, does this all translate into the black 3-piece suit appearing more in the workplace? Ultimately, social lifestyle invades our work world more than it ever has before. Young men done black at nightclothes, all their favorite celebrities wear black suits, and old guys don't like think it's proper. That’s the perfect combination of factors that causes one to view the black suit as a way to look professional and still not Bow down to sthe Man.