Interested in learning how to get 360 hair waves? Good. 360 waves have remained a very trendy style of hair worn mainly by Black men for years upon years. But also a style that is sometimes difficult to achieve. There are many famous method to getting 360's, for instance like the H2O method, The Dub C plastic bag prison method & more...

When the person's hair is brushed frequently and taught to lay down, an attractive 360 waving pattern develops from the top of the head and down to to the sides of the persons head in a 360 degree circular pattern, although each mans wave pattern tends to be somewhat unique to him, almost like a fingerprint.

Before you start, it's always wise to begin your pattern off with a very recent trip to the barber, because waving works great with very short hairstyles.

There have been many different techniques to achieve 360 hair waves. This is a PROVEN technique that will work extremely well...

THINGS THAT YOU WILL NEED FOR 360 WAVES: 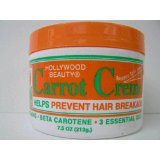 • Atleast 2 Du-Rags (only one wears out too fast)

• Carrot Creme, Shea Butter or Pink Oil Moisturizer
A great moisturizer is a must.
You WILL NOT get waves with dried out hair.

• A quality wave pomade - Murray's Superior, Dax & Duke wave pomades are all super product with a track record of success.

WHAT HAIR TEXTURE DO YOU HAVE?

Curly Hair (very soft or fine) - If this is your hair texture you may start the 360 waves process with step 1.

Medium Hair (normal) - If your hair lies down naturally with no extra efforts, that is considered medium. You can start the process with step 1.

Very Coarse Hair (heavy, tightly curled, thick) - Many men with coarse hair say they cannot achieve 360 waves no matter how much oil or pomade they use or how much brushing they do. But it can be done, the trick is to texturize the hair first to soften it. We suggest using a texturizing kit, such as S-Curl, or Duke. Follow kit set-up instructions carefully. Leave texturizer in hair for no more than 5 minutes. Use the neutralizing shampoo and allow hair to dry. Blot excess water from hair with a towel. Now you can start the 360 hair waves process with step 2. 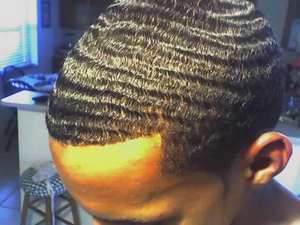 STEP 1
-Start with clean hair. A good conditioning shampoo would be best. Follow the simple shampooing directions & then blot hair dry with a towel.

STEP 2
-Apply your moisturizer of choice to your entire head. Apply a generous amount (size of a silver dollar) and massage into scalp.

STEP 3
-Begin brushing the hair starting at the crown(top) area. Brush downward from the top EVENLY all the way around for at at least 5-10 mins, preferably 20 mins.

STEP 4
-Soak your towel in hot water. Wring it out well.

Lay the towel on your hair for at least 2 minutes. Apply pressure to the towel so that your hair absorbs the moisture & softens. After the 2 minutes, remove the towel.

STEP 5
-Apply a generous amount (size of a silver dollar) of quality wave pomade throughout your hair. It may look white as if you've applied too much, but don't worry. It is not too much.

STEP 6
-Repeat the brushing cycle, brushing your hair starting at the crown(top) area. Brush downward from the top EVENLY all the way around for at at least 5-10 mins.

STEP 7
-Tie your hair down with a Du-Rag. This must be done in order to "train" your hair to lay in a thick 360 wave pattern & stop you from messing up your wave pattern while you sleep. This is called wave compression and if you don't wear a head covering EVERY NIGHT, then don't blame us for your waveless head.

DO NOT get a haircut for 21 days after you start this routine.
A lineup is fine, but not a haircut in this first phase.

But AFTER the first 28 day phase, you should get a cut every 2 weeks. Look at each hair cut as the next installment of deeper set of 360 waves & never stop training your hair at night with a Du-rag or wave cap.

After the hair grows back to full length from the 1st & 2nd & 3rd haircut, you will see deep wave patterns thickening EVEN MORE than the first 21 days of development, you will see a strong wave pattern on even extremely short hair! Congratulations!!!

IMPORTANT KEY: Brushing your hair evenly & regularly is an important key. Many men have said that they can only have waves on the crown or on the sides, this is because they did not brush evenly. Areas that are not brushed thoroughly WILL NOT 360 WAVE. But follow these directions and you will have more waves than the Atlantic ocean in no time!

We truly hope that we have given you the how to get 360 waves fast information that you were seeking.

Find A Great Top Ten Cologne! We Have The HOTTEST CUFFLINKS On Sale! What Fabrics Are Your Suits Made Of? Linen Suits In Warm Weather Check Out The Swagger Necktie Store! Fake Diamond Rings Click Here To Leave 360 Waves and Go To Mens Suits Home