Men's fashion in the 1950s was based on business clothing. If a man worked at an office, he wore a suit.

While suits were less structured than they were in previous decades, they were still made of heavy fabrics like flannel, even in the height of summer. Men dressed conservatively, and they had little variation in their clothing.

If you've seen film footage of men in the 1950s, you've seen the hundreds of men on their way to work or home, all dressed alike. In the beginning of the decade, men were expected to wear a full suit the majority of the time. Taking off the suit jacket was frowned upon except at home, when men were expected to relax in their white shirt and suit trousers.

Men wore hats when they went out in the 1950s. While the brims of the fedoras and other styles were smaller than they had been in the previous decades, the basic idea that a man was not dressed properly without a hat remained intact. Colors matched the suits: dark blue, gray, charcoal and brown.

The suits were made of single-breasted jackets that were shorter than they were in the 1940s. The shoulder pads from the '40s were also gone. Trousers were shorter, but contained a lot of fabric. Shirts were white and kept starched to look their best. Ties were thinner and the shirt collars were less pronounced. Cufflinks were a part of everyday wear. The fabrics used for suits were wool, silk and cotton. In the beginning of the 1950s, colors were mostly solid and muted. Later, patterned suits were also popular. The patterns were quiet tweeds and tasteful thin stripes. As the decade went on and fashion restrictions loosened, suit jackets lengthened and became even less structured. Trousers became narrower around the leg and used less fabric.

Formalwear consisted of tuxedos. They could have tails or not, and bow ties could come in either black or white, as the occasion required.

MENS FASHION IN THE 1950s STARTS A TRANSITION... 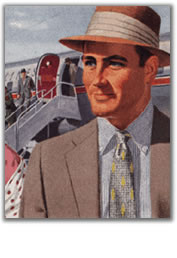 In the 1950s, as many people became more affluent, there was a lot more leisure time. Men's fashion in the 1950s reflected this new outlook on life as the decade passed the halfway point. Polo shirts and short-sleeved button-front shirts in bold new designs gave men the opportunity to express themselves as individuals.

Long-sleeved button-front shirts also became available in bright Jeans and t-shirts became popular for some of the younger men and teens after movies like "Rebel Without a Cause" became hits, although many teens stayed with the "preppie" look instead.

As clothing was allowed to become more casual, men began to get more choices in expressing themselves and in comfort levels. Colors and patterns. A popular way to wear them was open at the neck and with the sleeves worn rolled up to the bicep. Cardigan sweaters worn over button-front shirts or polo shirts were frequently worn when dressing was casual. Hawaiian shirts were bright, bold and colorful. When a jacket was required, many men chose patterned sports jackets made of wool. Men's fashion in the 1950s made some gradual changes that still affect the way we dress today.

The 1920s Had An Influence on Men's Fashion In The 1950s A Great Necktie Can Really Enhance Your Wardrobe Is Swagger a Good or Bad Thing? Top-Notch Men's Grooming Tips Here Learn To Select Stylish Dress Shoes! Why Wear Zegna Mens Suits?